More Than One Life 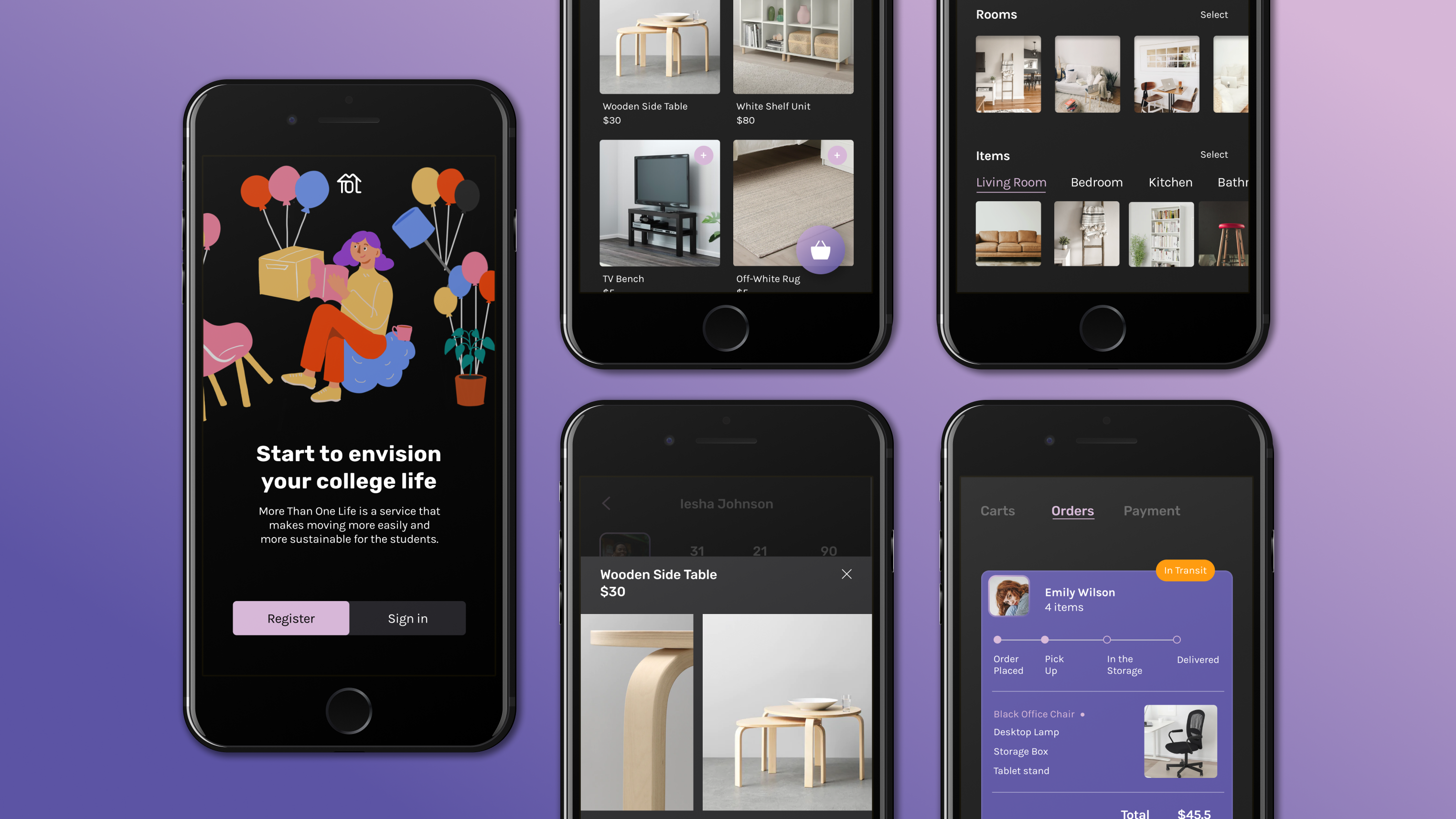 Every spring as students move off-campus, dormitory hallways,  dumpsters, and the streets of surrounding neighborhoods are strewn with lightly used but unwanted items, like lamps, textbooks, minifridges, and kitchenware. Unfortunately, most of it winds up in a junkyard.
Two months later, college students and their families arrive on campus hauling truckloads of newer, shinier versions of those same items. 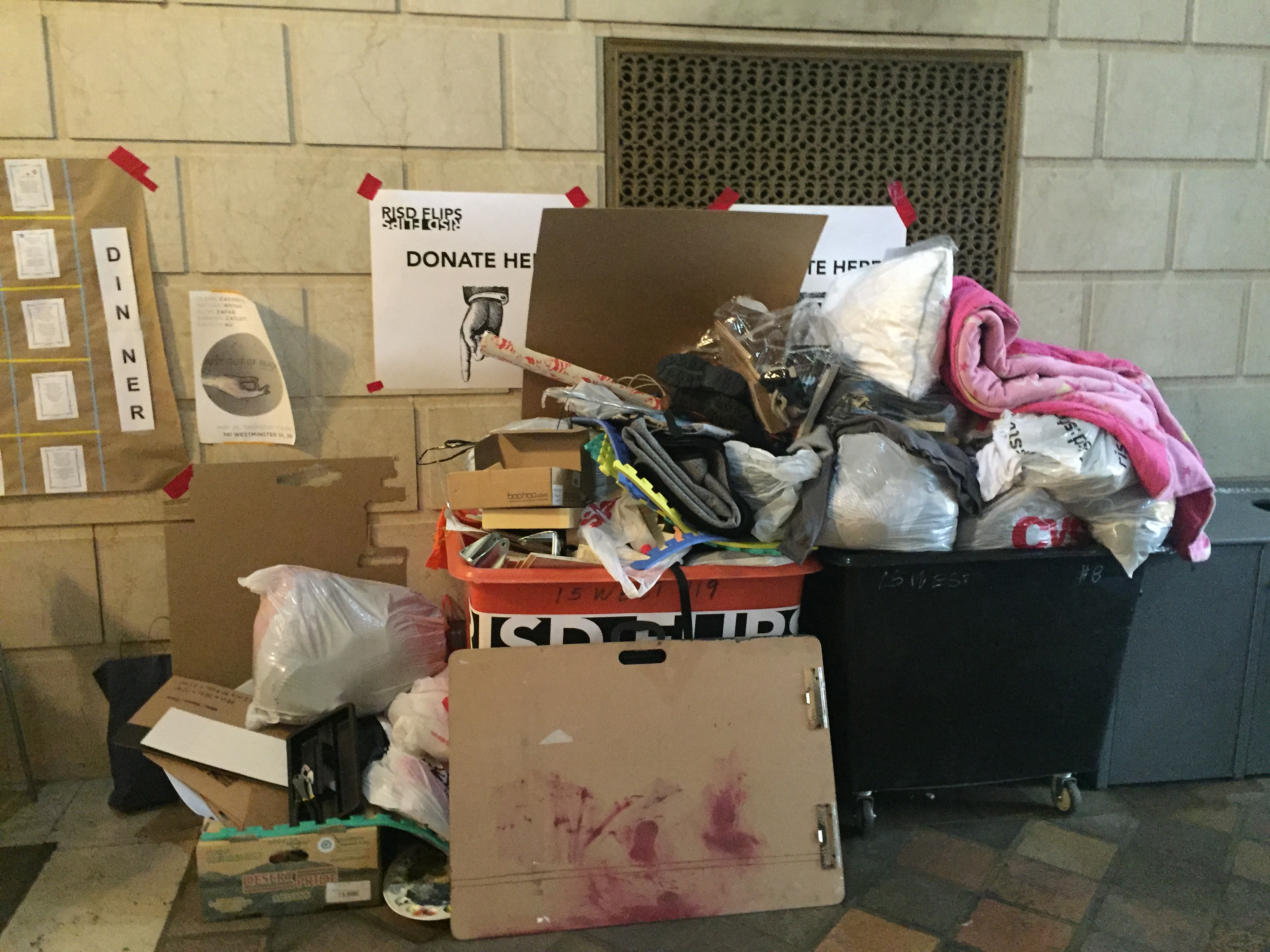 To narrow down the scope of the user problem, five interviews were conducted. The interviewees were users who are between the age of 18 and 26.

1.
The students usually underestimated the time it took to move out.

At the end of the semester, the students were busy with the final exams and assignments. Planning for moving out is usually not their first priority. Many of the students feel they should’ve sold or donated the stuff, but they always end up leaving them in the hallway or dumpster. The main reason behind this is selling or donating items requires lots of effort to contact the placeholder and deliver the items in person.

“I just feel like I don’t have time. I should’ve sold or donate the stuff, but most of it I just put out in the hallway for people to take or by the dumpster. I don't have time to haggle with craigslist people.”

2
The new coming students need a way to reserve the items they want.

For the new coming students, it is hard for them to find second-hand items. Because there is an awkward gap of two months, most of the students can’t reserve the items for two months because the owners already move out by then.

I am an out-of-state student, I spent lots of money on furniture when I first moved in here. I tried to find second-hand items online. But since most of the students left around May and June. It is hard to find much good stuff. 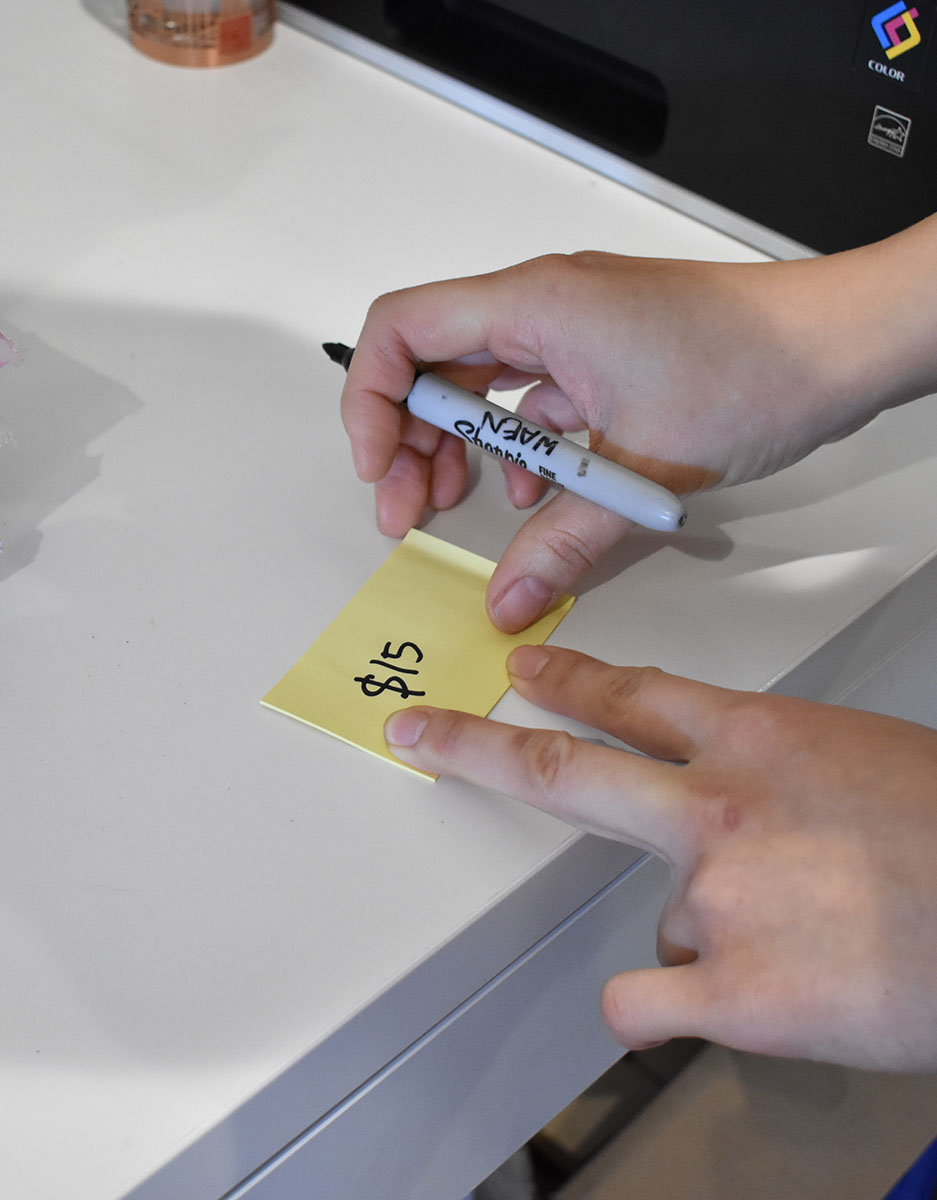 I identified the project should focus on two user types: The senior students who are going to move out and the freshman who are going to move in. All my users experience the frustration of selling/buying items on the current trading website. The current websites cater to users who only buy a few items at a moment. The users need a tool designed for a large amount of items selling.
‍
I quickly honed in on the product feature I wanted to focus on: selling the items as a whole set instead of multiple purchases and generate the following statement: 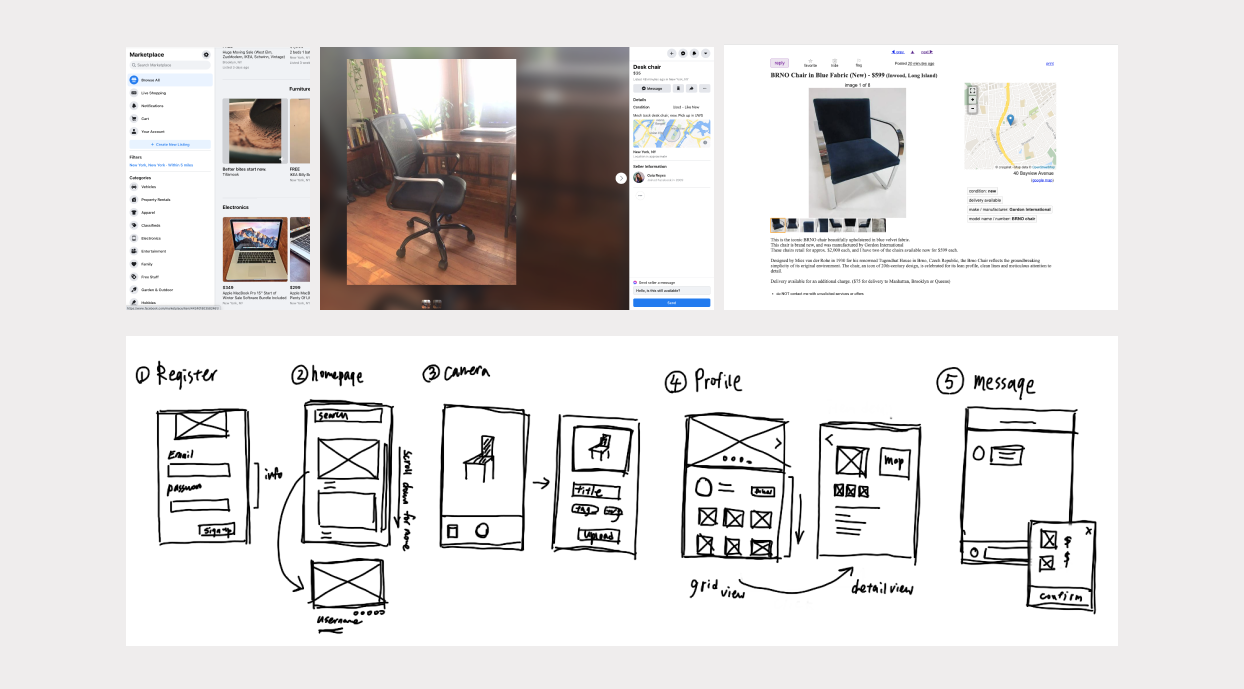 Conducting usability testing with three participants with a low-fidelity prototype helps me to pinpoint the concept of solution, user flows, and features.

1.
Items sorting should be sorted by rooms or functions, it takes users a long time to find the items they are looking for.

Below each user pages are lists of items they are selling. However, if the user lists too many items it will be hard to identify items.

Solution: Categorizing the items by rooms helps the users to pinpoint the thing they are looking for.

I would like to know where are my furniture and keep track of the process. Especially it is month-long processes

Purple and black are the main colors of the design. The colors explore subtle playfulness through gradients and illustration. The photo-heavy layout lets the users explore the contents smoothly. 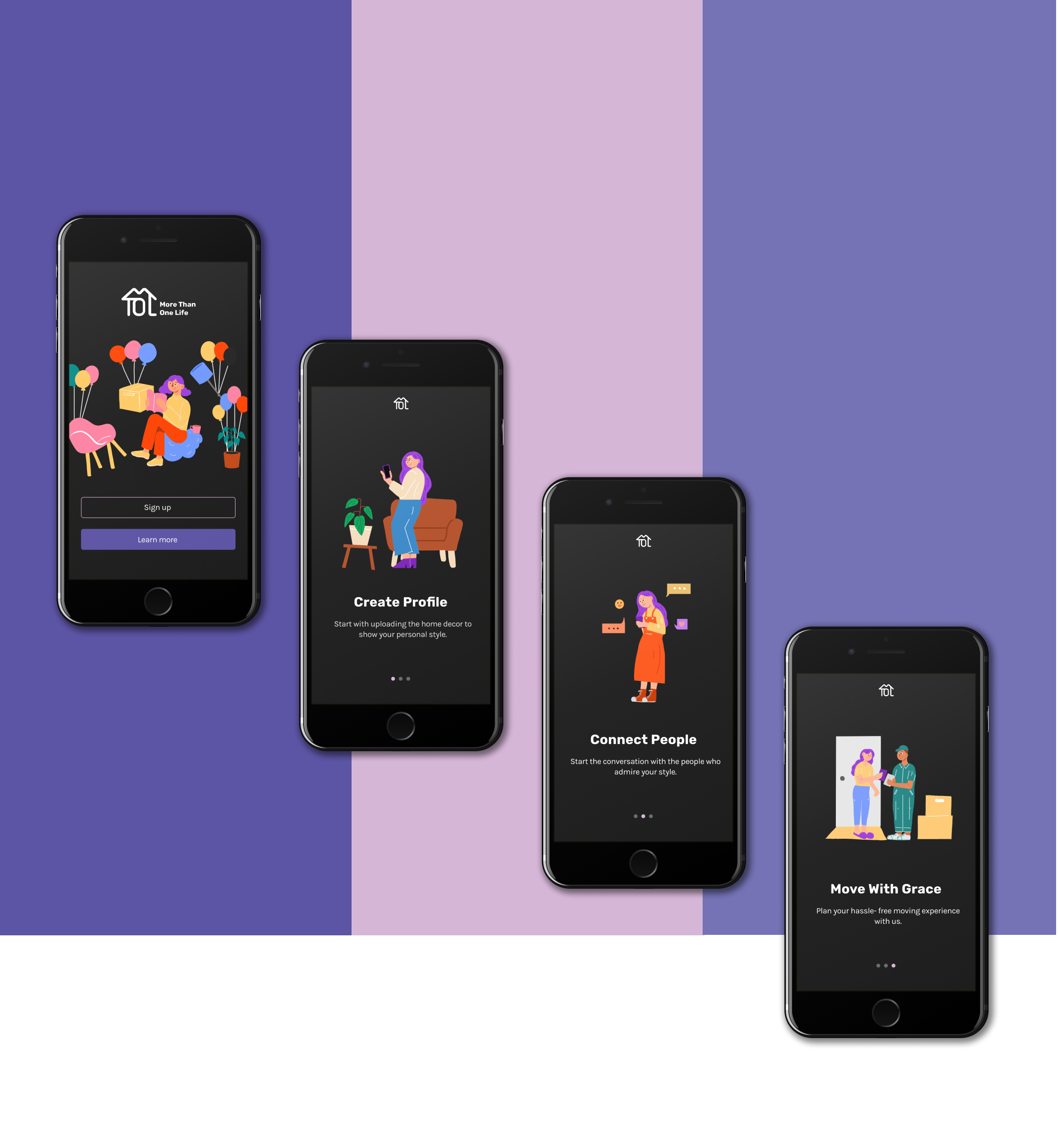 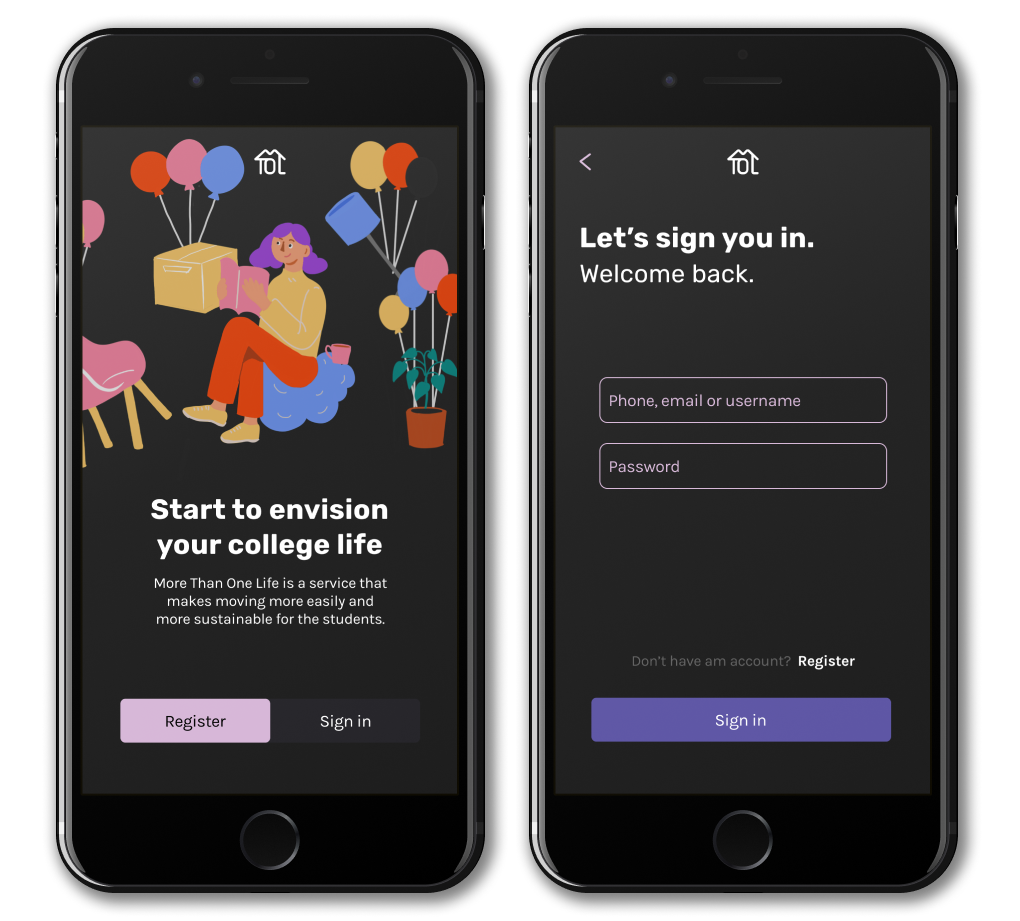 Only a certified school email can be registered as a user.

By uploading the item's photos, the user can specify the availability and price. 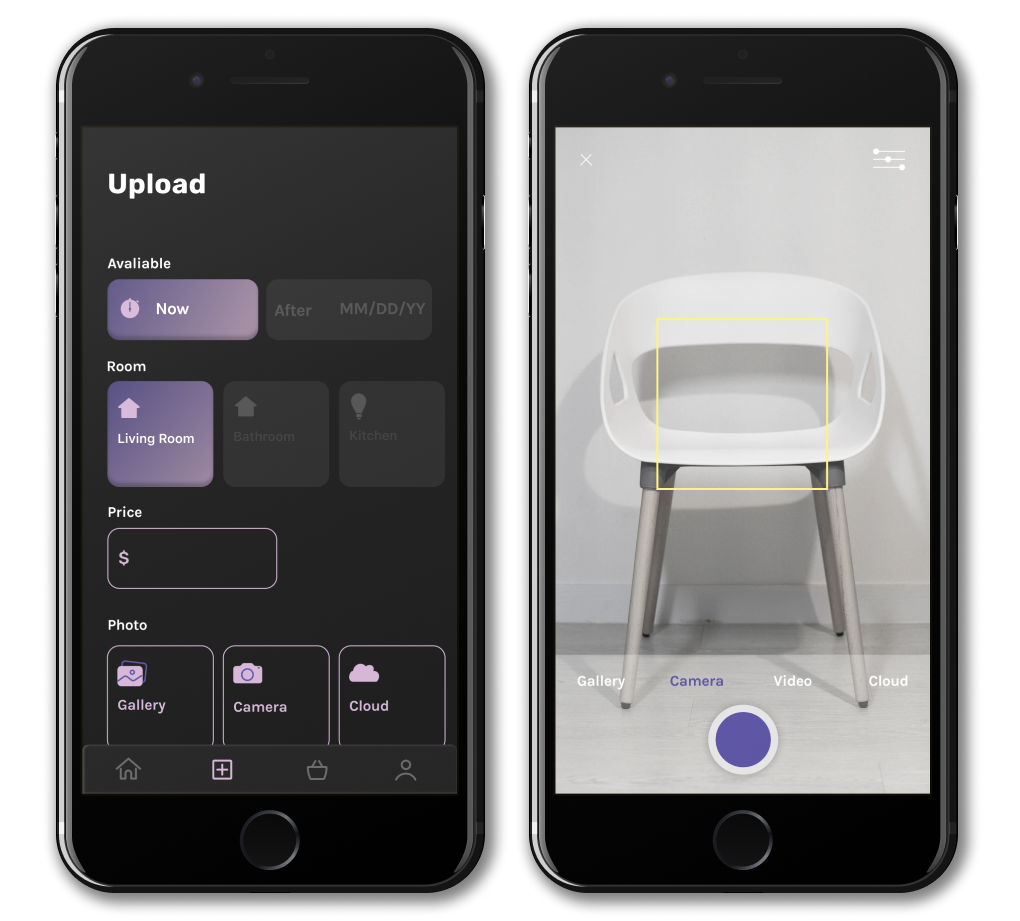 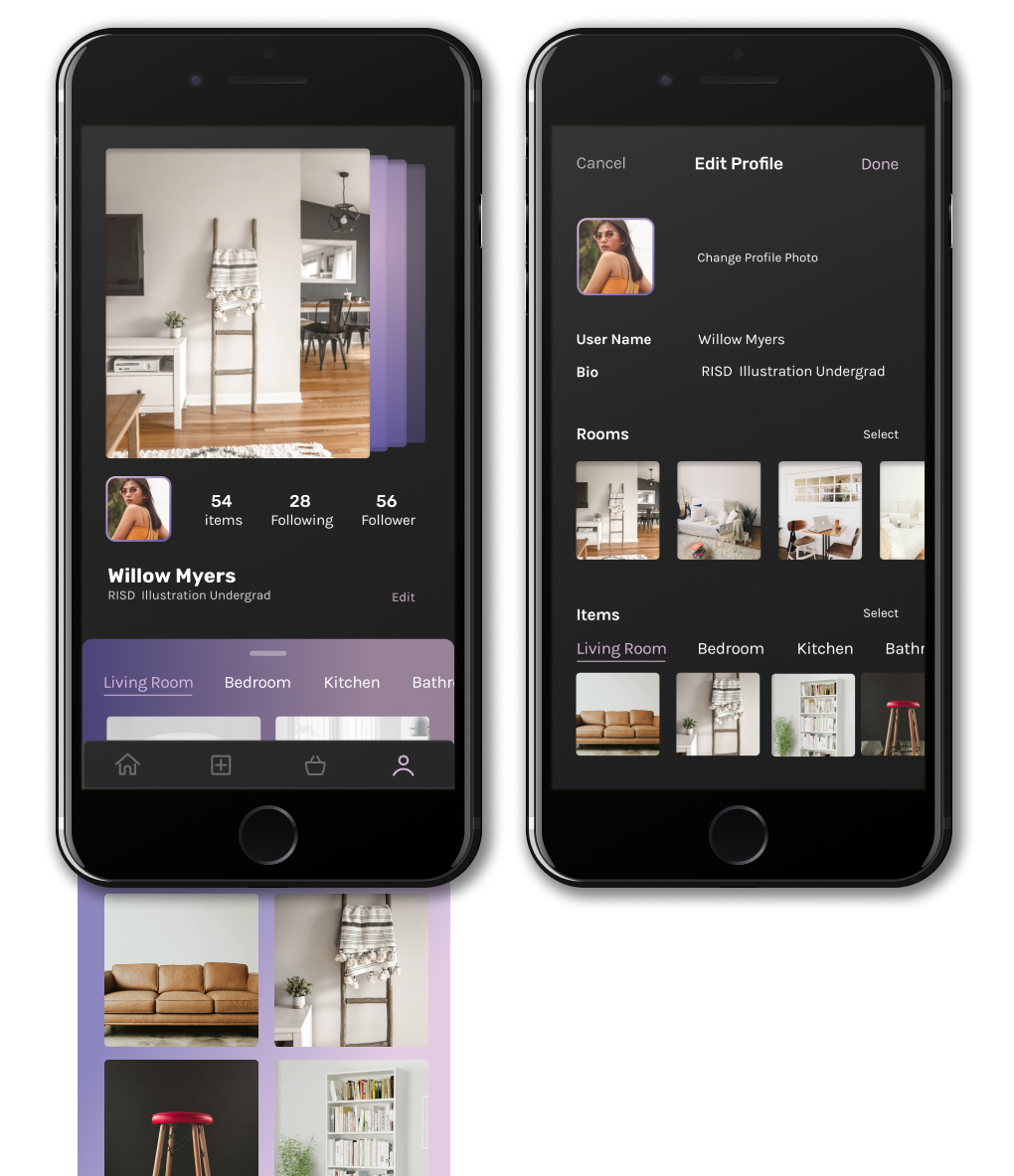 By upload the house and furnitures photo, the users create a page represent their own aesthetic.

Find the furniture by browsing the real people's house.

With just one click, the user can add the items in the shopping cart. 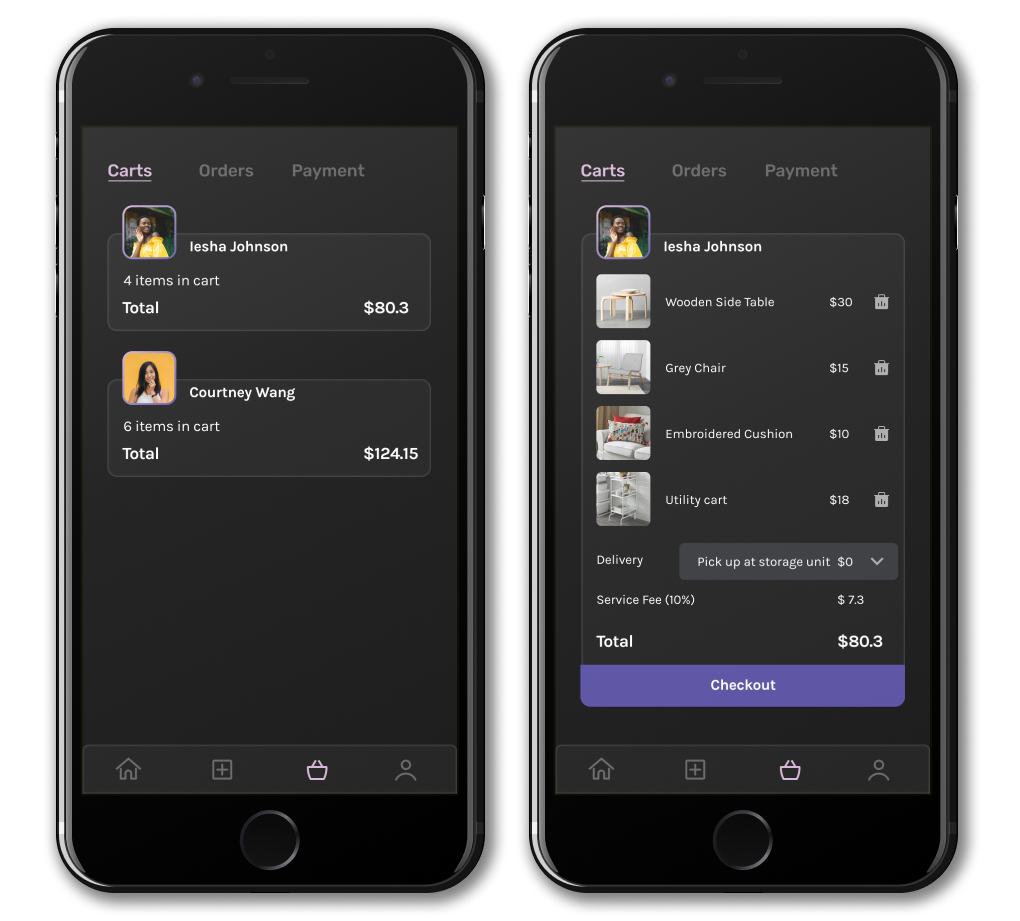 The users can review their shopping cart in the cart section which is categorized by sellers.

No matter the users are buying or selling. They can track where are the items easily. 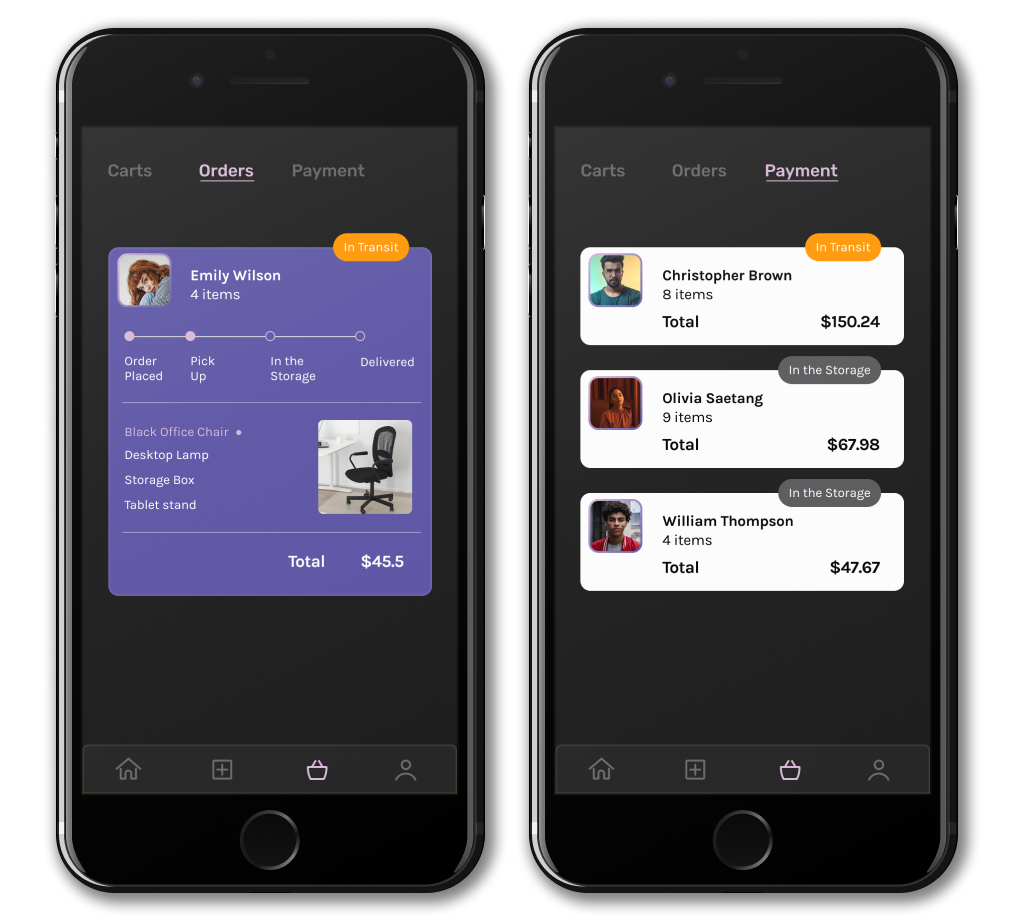 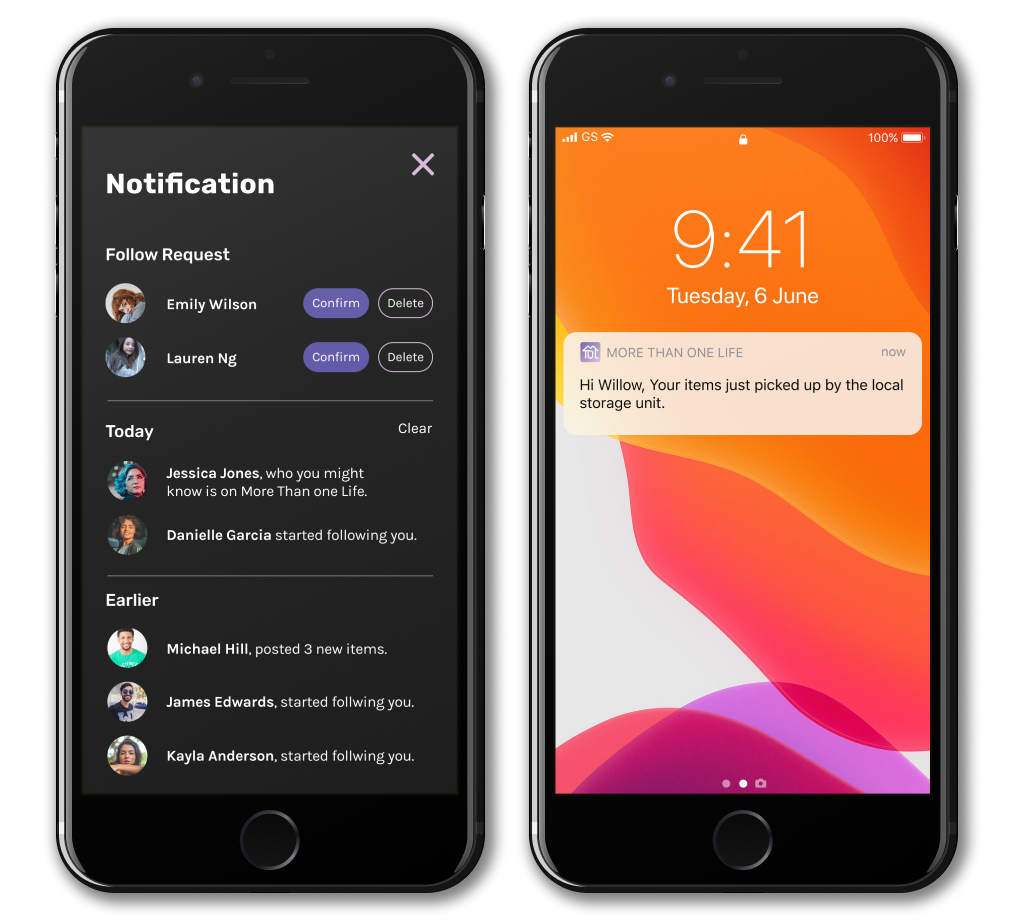 The user will be notified when the items have updates. 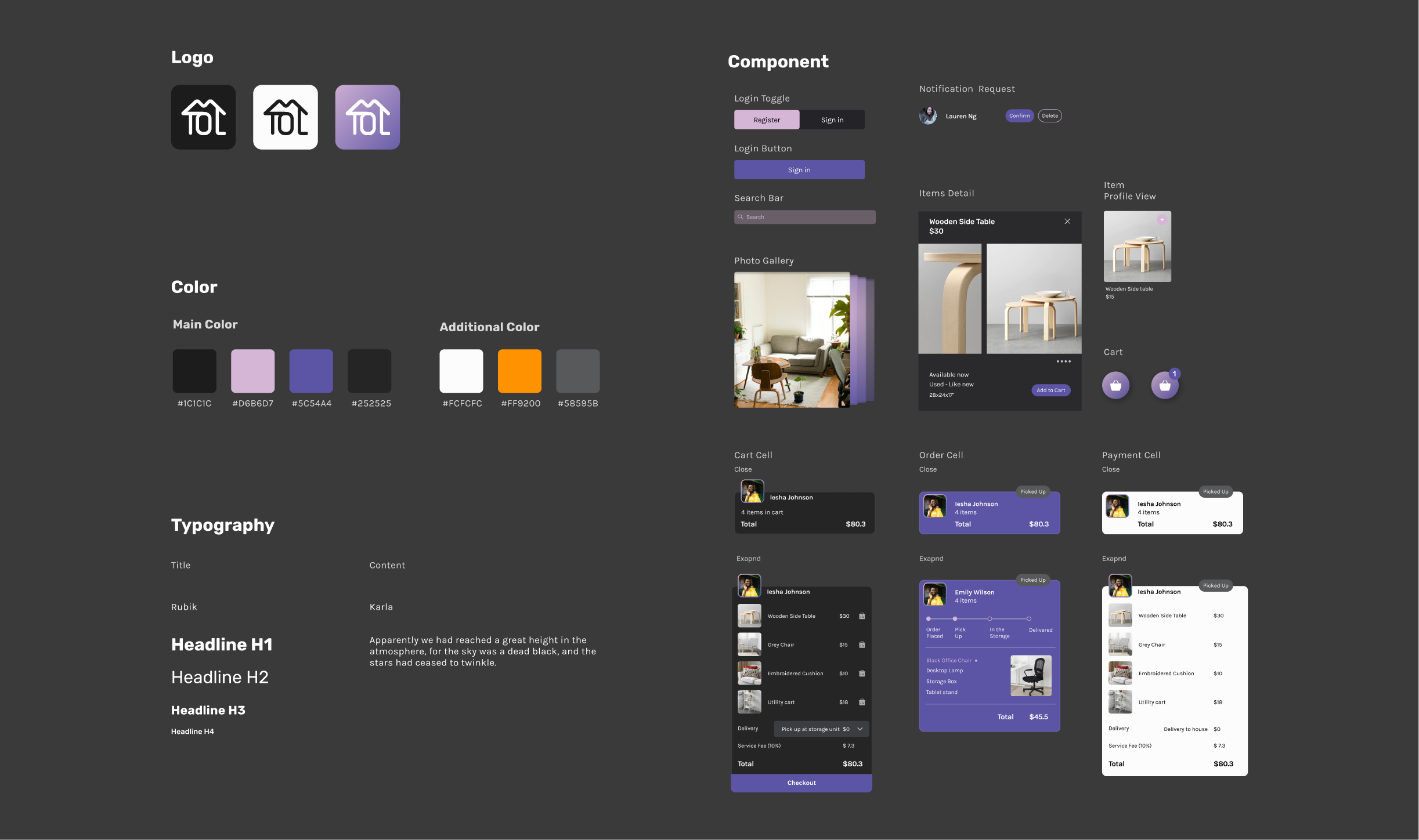